The quenelle is mentioned as far back as the 1st century, in “Apicius, the Culinary Art” by the famous Roman gastronomer.

It is also claimed that Louis XI, passing through Nantua, sampled the “quenelle à la Nantua”. Efforts have been made to prove the precedence of this dish in our area.

In the 16th century, “L’Ouverture de Cuisine de Lancelot” by Casteau proved that the dough named “agnoilen”, poached in a broth, was the ancestor of the mixture used to make quenelles today.

It was enjoyed by King Louis XV and his courtiers during “Grand Suppers” at the royal castles. Made from simple farm ingredients (milk, eggs, flour, fat), cooks at the time had the idea of turning it into a “noble product” by adding a stuffing of poultry, fish and… game, too! The quenelle was considered a “refined dish” in the King’s Court.

Pike is a freshwater fish which is abundant in the lakes of Nantua and Sylans: a raw material on our doorstep! Its lean and firm flesh is particularly aromatic.

Its flavour is unrivalled!

For centuries, the European crayfish, known as “Astacus Astacus”, was caught in lakes, rivers, streams… This species was the only one used to make crayfish butter and is what gives the “veritable Nantua sauce” its colour! In the same family as the lobster, this crayfish grows to a dozen centimetres long. Its shell is brown with red shades under its claws. It has disappeared from the area due to water pollution. Now it has to be imported from Greece or the Balkans. The shell, cooked, crushed and filtered, is what gives the butter its incomparable flavour.

The quenelle is a traditional dish and remains the speciality of the small town of Nantua, world-famous for its “Quenelle sauce Nantua”. –An author from Lyon once said that quenelles were “the greatest satisfaction that can be given to the palate of an honest man”.

Quenelle-makers have aimed to offer a wider range of flavours, for example chicken quenelle, veal quenelle, salmon quenelle, red mullet quenelle or even game quenelle. But the real Nantua quenelle is pike quenelle.

The Nolo Frères company was founded in 1948 by the owners of the Hotel de Lyon, considered to be one of the best places to eat in Nantua. René-Jacques Nolo took over in 1984 and jealously guards the local gastronomic traditions: The “véritables quenelles de Nantua” and “véritable sauce Nantua” (registered trademarks). Mr Nolo, now retired, sold his business to Adrien Caldognetto.

These products are sold in France to very prestigious customers, are listed in several gastronomic guides, have won many international awards and have appeared in many press articles.

> See the list of places to buy quenelle and Nantua sauce

No direct sales but you can order online www.quenelledenantua.fr 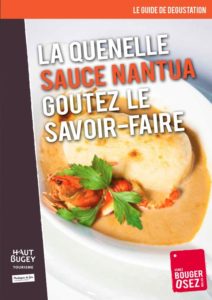