Famous for its industrial know-how, Oyonnax enjoys a remarkable natural setting. In summer and winter alike, it offers many cultural discoveries along with a wide range of leisure activities and relaxation opportunities.

A city at the heart of the Jura Mountains

Oyonnax, located 540 metres above sea level in the heart of the Jura Mountains, is also a city at the gates of the Haut-Jura Regional Nature Park: this region of lakes, forests and rivers is ideal for hiking in fine weather and Nordic activities in the winter, with several ski resorts close by (Hautes-Combes, Plateau de Retord, etc.).

The Sarsouille is a river that springsfrom the ground near Lake Genin before flowing through the heart of La Brétouze forest. It then winds its way past the allotments before entering the Oyonalithe Park, then René Nicod Park. It continues its course in the underground tunnels then exits the city on the Bellignat side, before throwing itself in the arms of the Lange and ending up in the Oignin.

THE FIRST DRIVER OF LOCAL INDUSTRY

For a long time, the Sarsouille powered grain and timber mills. In the 19th century in particular, when craftspeople were looking for a way to obtain energy to produce combs in larger quantities. It then became a driver of industry in Oyonnax: intake and outlet canals were created and reservoirs were built

A short walk from the city centre, La Brétouze is a very popular place for walks and leisure. It is an ideal place for outdoor sports with its specially created trails for mountain biking, hiking, orienteering and fitness. All the information is available at the Tourist Office!

La Brétouze is home to both deciduous trees (oaks, beeches, etc.) and conifers.  Forestry was a great source of income for the population. Forests like La Brétouze allowed them to make combs, erect buildings, heat homes, etc.

A city of many skills

Economically, Oyonnax is renowned for the know-how of its long-standing plastics businesses. This know-how, for which Oyonnax is world-famous, is revealed at the Comb and Plastics Museum. Its exhibition charts the city’s industrial history, from the first combs to the plastics of tomorrow, and celebrates the city’s motto: “It raised itself from the ground thanks to its inhabitants’ determined work”.

Box is a shrub that thrives in forests. This hard wood with a very fine grain can be used to carve attractive objects with precision, like combs to hold ladies’ long hair in place.

In the early 18th century, box wood was replaced by the horn from cattle’s and horses’ hooves, known locally as “ergot” and “clampon”. Later on, celluloid, a type of plastic, replaced horn… until short hair became fashionable for women.

The people of Oyonnax were known as “Peigneux”, meaning “comb-makers” in French. To develop, they successfully adapted their techniques and diversified.  The city’s coat of arms puts it well: “It raised itself from the ground thanks to its inhabitants’ determined work”. Thanks to its hard-working residents, the small farming town managed to develop by expanding its industry. It has now become a major industrial centre for plastic object production.

A city that knows how to party

Renowned for its party spirit, Oyonnax organises big gatherings in its streets all year round (like the Winter Festival, Spring Festival, classes’ parade, wine show…). It also welcomes quality artists at the Aragon Cultural Centre and hosts many trade shows at Valexpo.

Find the list of events that punctuate the lives of Oyonnaxians

In the 20th century, the people of Oyonnax organised such big festivals that they were known as the “fêtieux” (meaning “the partyers”). During the Flower Festival, which took place from the first Sunday in August onwards, brass bands and flower-adorned floats paraded in the streets of Oyonnax. It was customary to elect a Queen of the day…

Another symbol of the city of Oyonnax is rugby, with US Oyonnax and its chant “Ici, Ici, C’est OYONNAX ! ” (meaning “Here, Here, It’s OYONNAX!”). The success of the USO rugby club, which reached the Top 14 in 2013, is also down to hard work, just like the city’s motto says. Indeed, sport is very important to Oyonnax, and it proclaims its status as a sporting city by hosting national and even international events: the Tour de France in July 2014, the French Gymnastics Championship in 2013, the final of the French Rally Cup in 2013, etc.

To visit the city

A tour of the city 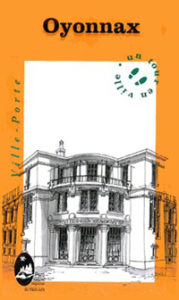 On a free city trail with 21 stops, you can discover the historic and architectural landscape of Oyonnax city centre, where houses and the plastics industry sit alongside family-owned workshops and small and medium enterprises

How about exploring the city of Oyonnax in an original way and in total freedom? That’s the challenge we’ve set you! Visitors who are curious to discover the city from a different angle can try this different and charming trail. A walk along the city centre’s streets, in search of painted walls that have cropped up here and there over the years. These creative frescos, reminders of the city’s lived experience, are multicoloured connections between past, present and future. A treat for the eyes!

Oyonnax, a dynamic and festive city renowned for its sociability, loves to bring happiness and colour to its guests’ plates. Its many restaurants will make you feel welcome, tantalise your taste buds and take you on a journey between culinary tradition and discovery. The art of hosting and sharing, rolling out the red carpet! Bon appétit !

To find a way