The River Ain, nearly 190 km long, served as a connection between the Jura Mountains and the River Rhône for a long time. Today, this surprising river is the ideal place for sporty or family holidays. For nearly 50 km, from Coiselet to Merpuis, the River Ain winds its way between the tall karst cliffs. Look down on the river from the top of the cliffs and enjoy the views.

The River Ain, from Jura to the Rhône

A tributary of the Rhône's right bank, the River Ain has its source downhill from the Plateau de Nozeroy, in the department of Jura. It hollowed out the deep valley between Revermont and Bugey, in a karst relief. Impetuous and liable to sudden flooding, it could only be navigated downwards: it was mainly used for floating timber from Jura and transporting casks (barrels), sometimes full of cheese, all the way to Lyon. For a long time, the river was an obstacle to travel across the area from Bourg-en-Bresse to Nantua. There were only a few ferries providing crossings as not many bridges could withstand its turbulence. From the 18th century onwards, stone bridges were built in Pont d'Ain and Neuville-sur-Ain then in Thoirette, Poncin and lastly Serrières-sur-Ain (suspension bridge). The Cize-Bolozon Viaduct was the first and only railway (and road) bridge built over this portion of the River Ain. The construction in the 20th century of five hydroelectric dams (Vouglans, Saut-Mortier, Coiselet, Cize-Bolozon and Allement, along with the Neuville-sur-Ain reservoir) profoundly changed the course of the river without detracting from the beauty of the gorges through which it runs.

From the 18th century onwards, stone bridges were built in Pont d’Ain and Neuville-sur-Ain then in Thoirette, Poncin and lastly Serrières-sur-Ain (suspension bridge). The Cize-Bolozon Viaduct was the first and only railway (and road) bridge built over this portion of the River Ain.

The construction in the 20th century of five hydroelectric dams (Vouglans, Saut-Mortier, Coiselet, Cize-Bolozon and Allement, along with the Neuville-sur-Ain reservoir) profoundly changed the course of the river without detracting from the beauty of the gorges through which it runs.

The Cize clam, a limestone curiosity 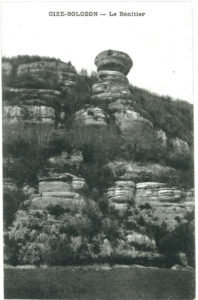 Around 10,000 years ago, the warming climate caused the glaciers that covered the whole region to melt. The flowing water carved out the Ain gorges, caused limestone erosion and sculpted rivers and rocks. Near the viaduct, clinging to the slope of the Revermont, a natural geological curiosity shaped like a clam overlooks the river.

There is a legend about this “clam”: Rabelais’ character Gargantua, always thirsty after his lavish meals and fantastical adventures, is said to have put one foot on this white protuberance and the other on the opposite slope of the gorge. He is then said to have drunk the water from the River Ain, swallowing up a boat and its occupants in his haste !

Before being named after its department, the River Ain was called “Igneus”

The Viaduct of Cize-Bolozon,
a remarkable work

Building work on this important structure began in 1872.

In three years, engineers and workers put up the giant skeleton of eleven arches and ten columns designed to support a deck 269 metres long, spanning the River Ain.

This viaduct had two purposes: a road on the first floor; a railway on the second. The materials nearly all came from the immediate surroundings: gravel and sand straight from the river, and stone from the quarries of Bolozon, Grand-Corent and Corveissiat. Work was often disrupted by the floods which swept away part of the site and filled in the excavated areas. This big bridge, whose upper deck is 53 metres above the Ain’s normal water level, was opened to railway traffic in 1875 and road traffic around thirty years later.

In 1944, the Second World War was coming to an end. To slow the Germans’ progress, the Resistance decided to damage the viaduct in order to cut off the rail connections. On 12 July 1944, explosive charges were placed on the keystone beneath the road between columns 6 and 7. Unfortunately, although this was only intended to damage the structure, it proved fatal to it.

Rebuilt to the same plan, the viaduct has six arches for the road part, widened from 1.90 m to 3 m; these support eleven arches with a 20 m opening for the railway.

Despite incidents and lethal accidents, work progressed spectacularly fast. It was completed on 13 May 1950. The viaduct was used from 14 May onwards by the Autorail and was inaugurated on 19 May 1950.

From steam to TGV trains

From 1865 onwards, the General Council of the Department of Ain made every effort to make a rail link between Bourg-en-Bresse and La Cluse become a reality. The construction of the viaduct was part of this project.

From 1876 to 1884, the line named “la Voie des Carpates” (“the Carpathian Way”) was used by various rail companies. In 1938, the SNCF took over the management of the line between Bourg-en-Bresse and Bellegarde-sur-Valserine, but from 1940 onwards, the mountain lines suffered restrictions due to a lack of coal, petroleum and oil. Traffic was reduced to a minimum.

After the reconstruction of the viaduct in 1950, steam locomotives used it until 1955, then diesel traction Autorail cars replaced them until August 2005.

In 2005, the route was closed so it could be adapted to TGV high-speed trains. In August 2010, the electric traction TGV crossed the viaduct and provided a new way to admire the hilly landscapes of the Voie des Carpates.

To find a way